AI for Dating Apps: How Machines help People find Love
Dating apps have been an incredibly valuable asset for thousands of people all over the world to find their perfect partner. While Artificial Intelligence can help with matching, transforming the future of dating.

:)You have successfully subscribed! Thank you for subscribing to our newsletter!! Email has already been taken
back to blog
Sep 09 2019 | byNatalia Kukushkina

Ah, the 21st century - the era of the Internet and technology. But still, despite the technological advancement and hundreds of new and exciting possibilities, most people strive for love - the eternal wish and desire of all generations.

Dating apps have been an incredibly valuable asset in helping thousands of people all over the world find their perfect partner. And thanks to new technologies, the process of finding love online is becoming more accurate and refined.

So how exactly can Artificial Intelligence help you find the one and how will it transform the future of dating? Let’s have a look.

The primary goal of any dating app is to match the users until they find a perfect match. Years ago, the process was not very sophisticated.

If we take Badoo or Mamba as examples, the app would not do the matching for you. Instead, you were just presented with all the available options in accordance with your filters and all you had to do was scroll through hundreds of different profiles.

The technology considers your past behavior and past preferences, your in-app activity and, based on this data, will offer only the most relevant matches. Venture Beat nailed the whole AI-based matching by stating that “today’s dating sites are only as good as the data they’re given”. That means (as in any ML-powered project) the more data you provide to the app, the better the results would be.

As well, don’t forget about the capability of AI to identify the smallest hidden patterns and dependencies. While you may not even think about the level of sentiment in your in-app conversation, the algorithm can easily calculate it - and match you with a person who has the same level of sentiment or responds positively to the one.

Any app developer wants to provide users with a seamless and enjoyable experience as it directly impacts conversions and sales. If the user enjoys their time with your app, chances that he will upgrade to the premium version rise significantly.

Thus, one of the primary points of focus should be fraud detection in the dating app. But how do you do it manually?

Fortunately, you don’t really have to. Since the AI technology is so good at detecting the hidden patterns in the data, it may as well detect any suspicious activity and report it.

Scamming is nothing new for the dating apps. There are thousands of fake profiles across the Internet and most of them would require the users to pay a certain amount of money “for the sake of love”.

The use of AI for fraud detection can significantly leverage the users’ experience and minimize the potential risks of using the app.

Related to the point mentioned above, moderation of users’ profiles contributes to user experience as well.

If a person misbehaves and shows intolerable conduct, the moderator has the right to delete their profile or, at least, warn the user. But the process of finding such users can be really complex and consume too much time.

By using AI, moderators will be able to almost immediately spot the suspicious profiles and take appropriate measures. This, in turn, will have a positive impact on other users and will attract more new users to the app.

What about other options?

Better matchmaking and less fake profiles are nice and all, but are these the only options we have if we speak about the future transformation of the dating apps?

Though seemingly weird, DNA matching is actually becoming a thing. A sample of a person’s DNA is sent for analysis and will then be matched with the most suitable (from a scientific point of view) person.

By now, there are only a few apps that use this technology (like DNA Romance) but it seems like DNA matchmaking will grow bigger in the future. 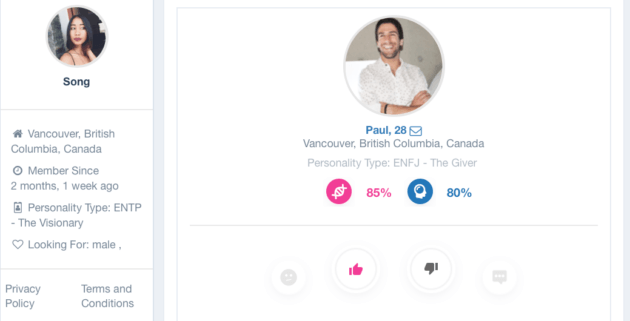 It is one thing to sit at home and casually scroll through the app and completely opposite to actually have a video chat with a complete stranger.

While people are still aware of video chats, dating apps started to implement them slowly. Badoo already has a live chat option and Tinder has Loops, which are 2-second short videos.

Videos can really help users find their match better and faster - but first, we need to get used to the idea of actively using the videos and not being embarrassed or concerned about it.

For a better understanding of the dating app anatomy, let’s have a look at some of the most popular apps and see which distinctive features help them engage thousands of users all over the world.

Founded in 2006, Badoo is one of the oldest dating apps out there. Even though it’s a bit outdated, it is still actively used and in 2018 it reached 150 million users.

At first glance, Badoo has a standard set of features, needed to find love online:

However, what sets the app apart is its recently introduced feature of finding a celebrity lookalike in the app’s database.

The Lookalike feature allows users to upload the photo of the desired celebrity (or any person, to be honest) and the service will then search through thousands of profiles to present you the ones that resemble your choice the most. Oh, and the fun fact - you can actually see your own lookalikes in your profile! 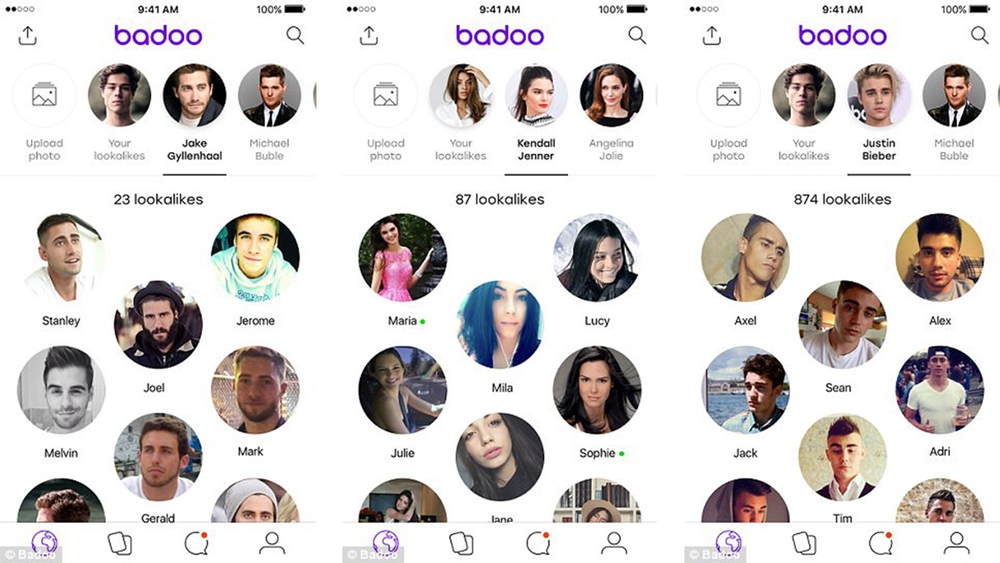 While the company’s founder claims that this feature is a new and fun way of finding a partner online, many people actually spoke against it, stating that “good looks are not the only reason to start a relationship”. So the new feature remains quite controversial, even though people actively use it.

An example of an AI-powered dating app is AIMM - Artificial Intelligence Matchmaker.

The app acts more like a virtual assistant and is incredibly personalized. Once you register, the app will first “get to know you” through asking questions and listening to your voice. Then, the app will start introducing the candidates - and will do it one at a time, to let you analyze them and see whether they are a good match.

Such an approach is quite revolutionary and perfectly suitable for the 21st century. Just think about it: no more viewing of dozens of profiles per day and no more fakes. Instead, the user gets a highly personalized experience with a higher chance of successful matching.

Approximately 70% of the couples will meet online in 2040, according to the numerous surveys. And no doubt, technology will play a major role in the matchmaking process.

Is it a good or a bad thing? We cannot really give a definite answer. Sure, some of the old school romantics out there will miss the times when you could easily approach a person on the street and ask them out for a coffee. On the other hand, if you had a chance to meet the life of your life with a few taps and minimal effort, would you really ditch the chance? We doubt so.